You are here: Home / Freezable / Tomato Soup with Chickpeas and Pasta
I try to bring my lunch into work at least four times a week, but sometimes I am just too exhausted at the end of a week day to think about and prepare a lunch for the next day. Soups in general are great for these days; you can make a huge batch on Saturday, freeze it in single portions, and then grab when on the run. Food and Wine had a “fast” soup recipe listed so I thought I’d try it out (most soups take at least an hour to prepare). 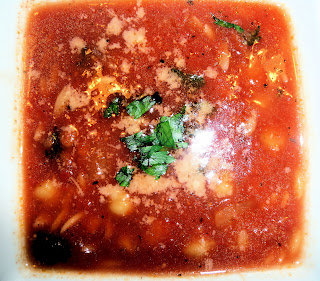 The original recipe is linked above. I made a few substitutions, based on what I already had in my house. 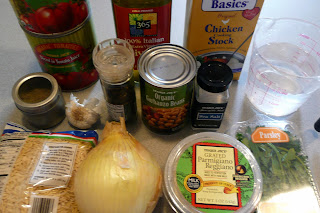 First puree the tomatoes with their juice in a food processor or blender. Feel free to puree at much or as little as you want. If you like your soup a bit chunky, only pulse the blender a few times. 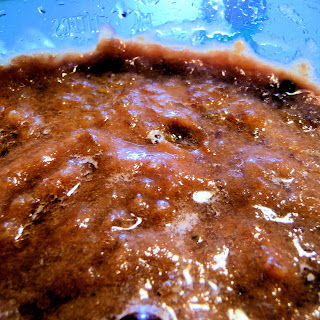 In a large pot (and I mean large– my Dutch Oven was almost too small!), heat the oil over medium-low heat. Add the onion and cook until soft, about 10 minutes, stirring occasionally. (The original recipe called for 1 whole onion. That seemed like quite a lot of onion for my tastes, so I used half of the onion in my ingredients photo.) Stir in garlic. 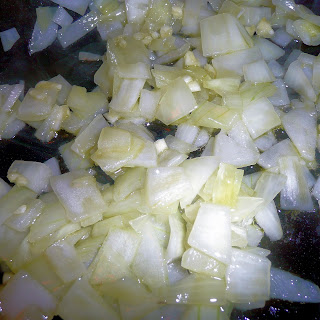 Add the pureed tomatoes, sage, broth, water and salt to the pot. Bring to a boil. Stir in the pasta and chickpeas. Bring the soup back to a boil. 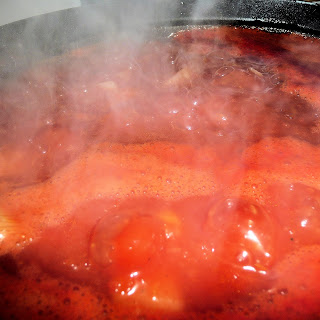 Cook for 15 minutes, or until the pasta is tender. Stir in the parsley, pepper, and grated Parmesan. Serve topped with an additional sprinkle of Parmesan.
I was impressed with how quick this recipe was, maybe 35-45 minutes from start to finish. What made it even more manageable was during the down time (10 minute cooking of onion, waiting for it to boil, etc) I was able to clean up the mess I was making.
The soup was really tasty and deceptively fresh tasting (that parsley really helped!). If you like a little kick, I think a few drops of hot sauce during the final boiling stage would be a nice addition. If you don’t have and dried sage on hand, the recipe suggests substituting rosemary or marjoram.
This dish would be great to sop up with garlic bread or even a cheesy toast. I’m excited to have this for lunch some time next week!