You are here: Home / Beef / Broiled Tenderloin Steaks with Ginger-Hoisin Glaze
There were a couple of parts to this recipe that made me nervous to try it out: working with fresh ginger and using the broiler. The latter ended up being the more difficult part, but that was due to my all-encompassing fear of burning the beef tenderloin steaks. Overall though, this dish was a lot easier than I made it out to be. I followed this recipe almost exactly, but the original is linked here. 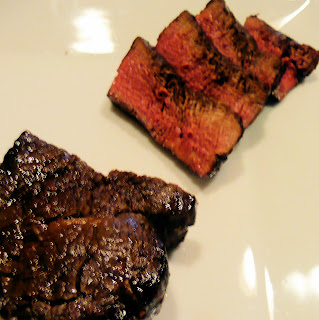 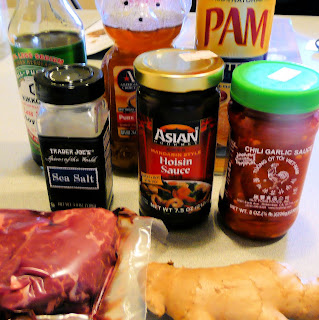 Hoisin sauce and the chili garlic sauce can be found in the Asian section of your grocery store. Getting to a supermarket for me is kind of a pain but I was able to find the sauce in my corner store.
Before doing anything, preheat your broiler to high. If you’re like me and have zero clue what the broiler even is, chances are it’s within your oven and you just need to press the “broil” setting. Be sure to remove everything from the oven before turning it on.
Broiling is basically the opposite of grilling—the heat source is coming from above instead of below. Because the heat is so high, really keep an eye on anything you are broiling; it can burn very very quickly. Also be sure to have an oven mitt that can withstand high temperatures. The broiler may cause some smoke so be sure to turn your exhaust fan on during cooking. Ok, time to actually start cooking…
Ginger root is much easier to work with than I imagined. It looks so intimidating but I’m glad to have this ingredient on hand—it can be used to treat nausea and is also known to have anti-inflammatory properties. The root can be wrapped in plastic and refrigerated or frozen for long term use.
To work with ginger root, use a peeler to peel off the bark-like outer layer for the area you’ll be using. You will begin to smell ginger almost immediately. Yum. 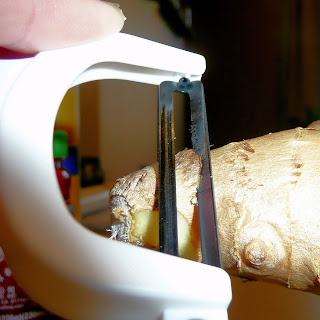 Cut the peeled area off. You can either mince the ginger root with a knife or use a grater. As a warning, the root has a lot of juice to it and can get a bit slippery so be careful of your fingers. I may or may not have lost a piece of ginger when it slipped out of my hands and few across my kitchen. Whoops.
To prepare the hoisin glaze, combine the hoisin sauce, ginger, honey, soy sauce and chili garlic sauce in a small bowl using a whisk to combine. Set this aside.
The original recipe suggested putting the steaks on a foil-lined broiler pan. I somehow ran out of foil, so I just put them on a broiler pan coated with cooking spray but for cleaning purposes, I’d suggest using the foil. Sprinkle the steaks with salt. 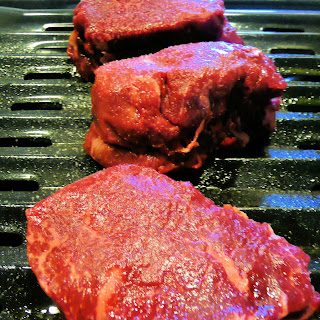 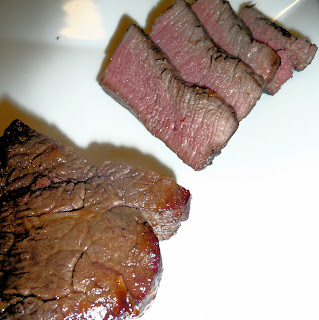 So, I ended up putting mine in for a good 5ish more minutes, turning the steaks half way through. They came out a bit too rare for me with the original time suggested, but I think this is really up to the person cooking it. I was so fearful that it was going to burn that every 2 minutes I was checking on the steaks, which probably wasn’t helping the whole cooking process.
When it was finally cooked to my liking though, this was one tasty dinner. When making the glaze, I was afraid it might be a bit on the spicy side but it actually ended up having an almost caramelized taste to it, which was a pleasant surprise.
The hoisin glaze would be great on a number of different proteins: chicken, salmon, perhaps even scallops. Using the broiler still makes me a bit nervous though, so I may consider whipping up a batch of this glaze for use on the grill, if it ever warms up in Philadelphia (today is March 28—almost April—and the high is 45. Super.) I hope you enjoy this meal with less stress about broiling than me!