You are here: Home / Appetizer / Honey-Tomato Bruschetta with Ricotta
My CSA share this year has had plenty of tomatoes. Not that I’m complaining, I absolutely love them! But I’ve been running low on new inspiration for what recipes to use to highlight the tomatoes. I put out a request for yummy recipes that use cherry tomatoes on my Facebook page, and Katie H. suggested this Food and Wine recipe, which is a real winner. You slow roast the tomatoes to bring out the flavor and pair them with two types of honey and fresh ricotta cheese. mmm! 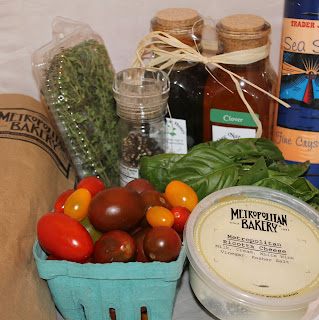 I wanted to go over the two different honeys used in this recipe. The tomatoes are tossed in the clover honey, which sweetens up the somewhat tanginess of the tomatoes. Clover honey is simply honey in which bees feed mainly on the nectar of clover plants.  Clover honey is mild, relatively inexpensive, and has a slight floral taste to it. The buckwheat honey is drizzled over the finished burschetta to bring out the flavor of the ricotta. Buckwheat honey is a darker amber colored honey that is produced by bees who feed mainly on the nectar of flowers on buckwheat plants. The flavor is similar to molasses and has a wonderful earthy flavor. (If you’re in the Philadelphia area, Bee Natural, located in Reading Terminal, has both honeys for sale).
This recipe is definitely not weekday friendly. You can roast the tomatoes beforehand and refrigerate up to 2 days to break up some of the time. Just bring the tomatoes to room temperature before serving.
To make, preheat your oven to 300 degrees. Line a cookie sheet with parchment paper.  In a large bowl, toss the tomatoes with olive oil, clover honey, thyme leaves, salt and pepper. 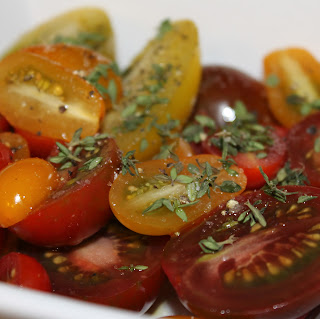 Add the tomatoes to the baking sheet, turning them cut side up. 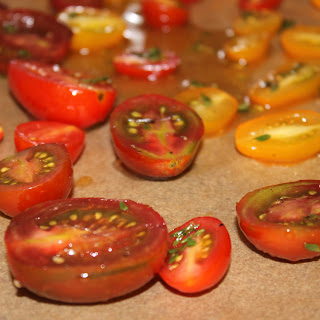 Bake for 1 hour and 25 minutes or until they begin to shrivel. Allow to cool. 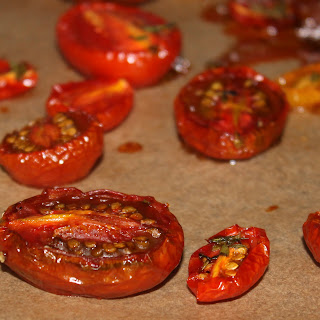 Preheat your broiler and add the baguette slices to a baking sheet. Broil for about 30 seconds on each side or until the edges of the bread are golden brown. 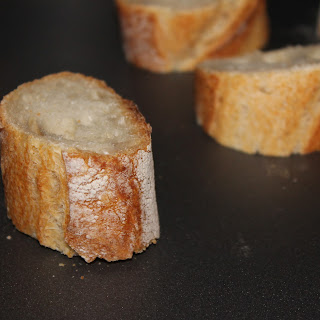 Add the ricotta to the baguette slices and top with the slow-roasted tomatoes. 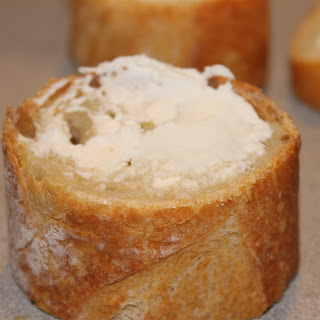 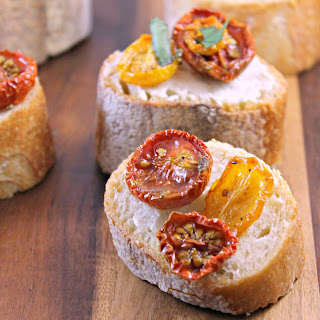 Lightly drizzle with buckwheat honey and sprinkle with sliced basil. 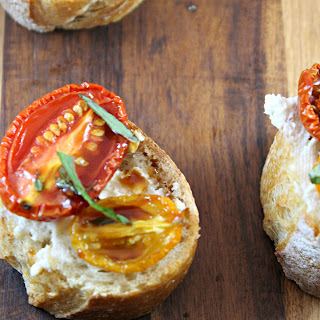 I tend to be awfully impatient when it comes to making food, I want my meal prepared in under 40 minutes. So I’ve rarely attempt to slow roast, well, anything. But the flavor of a slow roasted tomato makes the wait time well worth it! (It also makes your kitchen smell fantastic) The honey is a really nice addition and brightens up the flavors of the tomatoes. Creamy ricotta just finishes off the dish. The recipe is really simple (although time consuming) but would be a very welcome appetizer at any party.